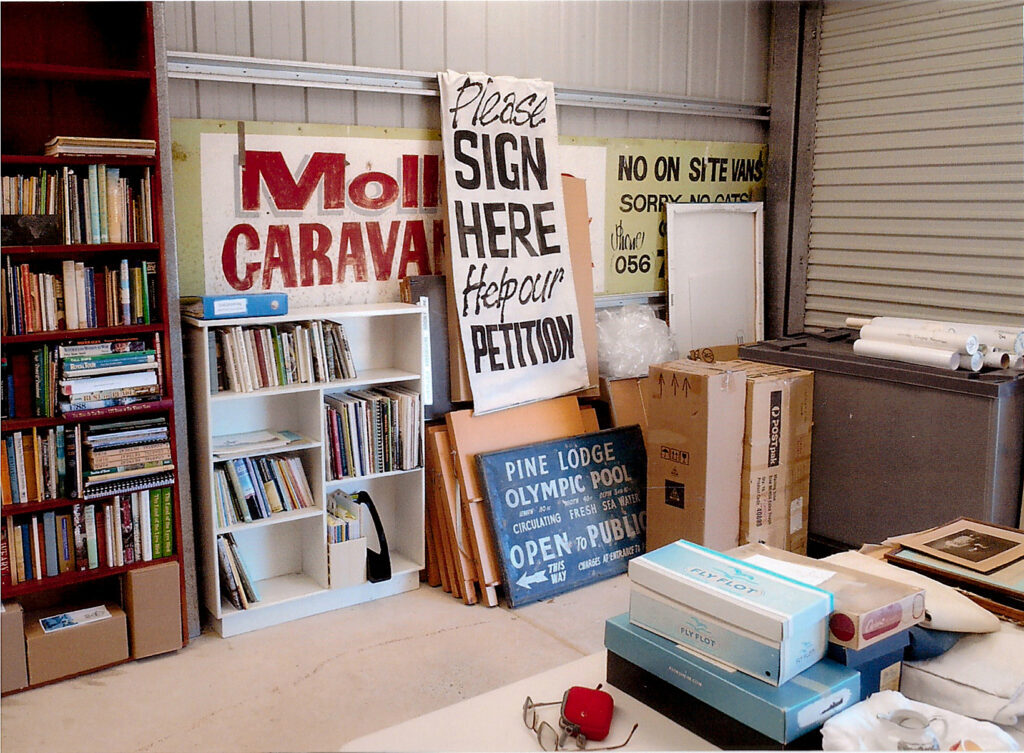 This Newsletter’s main story is about the Society’s Green Shed storage behind Warrawee in A’Beckett Street. We’d like to introduce you to it!

With all the current restrictions placed on us with COVID 19, working in the storage shed is limited and arranging for members to inspect the premises is simply impossible. With that situation in mind, I decided to take several photographs to show you how the storage looks currently, so that members could see that despite our current difficulties, something is actually happening in a most positive way.  The offer by the Bass Coast Shire Council to grant us usage of the shed is truly appreciated by the Society. It is a storage facility and not an exhibition venue. It gives the Society the opportunity to basically list and store all we have, ranging from photos, maps, books, prints, display cards, and three dimensional objects of varying kinds and sizes. With any future displays, exhibitions and the like, we will be able to present a better and more considered selection, when we can see exactly what we have. The shed is in a very central venue in Inverloch, and therefore convenient to all members. Currently we have no electric power for our computers, printers and the like, but it is hoped that with the support of the Council, a solution can be found.

Through the work of the Committee in the days before the severe regulations, a tremendous amount of work has been done in setting up the building generally, and in deciding our organizational plan of the many items we hold.

With no power at the shed, Secretary Lynn Kirk has been working on the Accession Register at home, along with many other tasks. It is a formidable task and I am very thankful to Lynn for her superb effort. Treasurer Harry Dunn is always busy, and he has also been busy working at home and at the shed to update what we have.

I would invite all readers of the Newsletter to look carefully at the photos. The floor is basic concrete, although one blue and white rug occupies a small portion near the work table. It would be nice to get some good quality second hand carpet to cover other parts of the floor. Notice our new four drawer filing cabinets, already filling up with the work done by Lynn. Notice also our two framed prints. The mapping cabinet with its many drawers allows us to lay our larger paper prints and maps perfectly flat (as they should be!) and not rolled up. Smaller pieces of art work that also require to be kept flat are housed in special folders purchased by the Society. The black boxes sitting on the new shelves, house our 3D objects, all listed methodically.

The work of the Society over the past 24 years is now bearing fruit. Our Patron Eulalie Brewster has expressed her delight at what has happened in the last twelve months. It is delightful to see all the ‘treasures’ Eulalie has held in her house for the past 24 years, now being revealed! Not all our ‘treasures’ have arrived at the Green Shed, but as time goes by, and COVID 19 restrictions are eased and with good fortune, lifted, we can gather the rest of the historical materials the Society has, and eventually have a true assessment of everything!

Monies raised by members over the many years – and housed in our investments, have been put to outstanding use, and as the needs develop for refinements in our storage arise, then those monies, will again be carefully spent to further develop our needs and aims as decided by the membership. These are exciting times for the Society, for being on the ground floor and being at the start of actual physical development, represents, not only a challenge, but also a privilege. Now is the time to try to attract new members – members who can add to the progress and usefulness of the Society. Getting new members will be difficult, but by each of us speaking with excitement and enthusiasm to all our friends within Inverloch – and even the owners of holiday houses about what we are doing, then we can be assured of the continuity of the Society.

Now that’s a very good question!  As this edition of the Newsletter goes to print, and having talked with Committee members and ordinary members in recent days, it is becoming increasingly clear that the thought of holding any meeting this year is almost nil!

The executive of the Society, by the use of the phone and e-mails, are continuing to conduct the business of the Society. Happily, Lynn tells me that correspondence is minimal.  Stay tuned!!

The lifeblood of our organization is members. This year has been extraordinarily difficult with only one meeting in February, and we are trying to keep you in touch through an improved, readable and pictorial Newsletter. Please continue to support the Society by renewing your subscription, and it is hoped our General Meetings will resume as soon as is practical.

For Those In Peril On The Sea

As a seaside town, Inverlochians can calmly stroll or drive down to the beach, the pier or one of the suitable vantage points that can be found along the Esplanade or Ramsey Boulevard, there to see the state of the waters in Bass Strait or Anderson Inlet. We can be impressed both in summer and winter for differing reasons. How beautiful are the colours of the land and water in summer as you stand in Ramsey Boulevard and look across to Point Smythe – how rough and moody Bass Strait looks in the depths of winter.

But how many of us have thought about the arrival of new migrants from Britain and Europe in Victorian times, and the journey they undertook?

In Victorian times, the voyage took anything from 3 to 6 months, depending upon the size and speed of the ship (sails, by the way).  Below deck comforts and meal arrangements were primitive by comparison with 20th. Century voyages. It was not unusual for some people to die during the voyage, but of all the fears that dominated Victorian international travel by sea, it was the sea itself. The sea, the ocean, is a mighty and fearsome foe, not to be fooled with or treated lightly, even in today’s world where we might like to kid ourselves we’ve possibly nearly mastered everything!

And so, the fear of the sea was a major concern, not only for passengers, but for the mariners themselves. Conditions for the ancient mariner were almost non existent. Remember, that any travel to international places – be it America, Asia, India and Australia could only be achieved by sea – no aeroplanes! It follows that such was the fear of the sea, the Victorians, almost frightened out of their wits, and generally holding sincere religious convictions that required the intervention of the Almighty whilst at sea, found actual voice and concern in hymns of the time. Two of these are known even today by their tune, even by those who reject any religious beliefs are “Eternal Father Strong to Save” and “Nearer My God to Thee”. It is claimed the second hymn was played by the small orchestra of the famous “Titanic” as she sank to her watery grave.

The tunes for the two hymns in question, as well as the lesser known hymn “Fierce Raged the Tempest O’er the Deep” – were written by the Rev. J.B.Dykes, an Anglican minister (1823-1876). The words to the first two were written by W. Whiting and G.Thring.

Fear of the sea by the Victorian mariners and by the ordinary citizen, is succinctly summed up in the words of the hymn “Eternal Father”.  Just read these carefully!

“Eternal Father strong to save, whose arm hath bound the restless wave,
Who bidd’st the mighty ocean deep, it’s own appointed limits keep,
O hear us when we cry to Thee, for those in peril on the sea.”

This is a sombre and emotionally charged hymn, and is still popular with choirs and congregations in Wales and South West England. The words of this hymn are powerful.

“Fierce raged the tempest o’er the deep,
Watch did thy anxious servants keep.
Save Lord we perish was their cry,
O save us in our agony
Storm winds drift us from the shore,
Say, lest we sink to rise no more, peace be still”.

One should therefore understand why a lighthouse, lifeboats and even some Rocket equipment, as Inverloch once had, was so important. Once in the water in Victorian times, your chances of being saved were practically nil – if away from the coastline – and almost nil if you were near the coast, unless you could be helped by a rescue crew at some port that had some Rocket equipment or a lifeboat rescue crew.

Problems at the Inverloch Foreshore

The Leongatha newspaper “The Great Southern Star” in January 1916, gave the following report of the Inverloch Foreshore Improvement Committee.

“….the question of giving attention to the silting up of the bathing enclosure was discussed. Various means were mentioned with a view of getting rid of the accumulation of sand, and it was decided that a working bee be held on Thursday next at 2pm.to effect the desired improvement. It was pointed out that if something were not done at once, the bathing enclosure would soon be useless.

The Committee have done excellent work on the foreshore during the past year or two, for they have provided commodious dressing rooms for bathers, carried out sheet piling near the jetty, and placed seats at different portions (!) of the beach for the convenience of the public.

The Committee deserves the thanks of all pleasure seekers at the district’s seaside resort for work done in the past, and any money subscribed in future will be expended to advantage, which will be a means of attracting a greater influx of visitors from the city who now frequent the seaside near Melbourne. Inverloch can now hold its own with the fashionable places at Hobson’s Bay and at the Heads, and only requires to be advertised to draw its quota of pleasure-seekers from the metropolis and inland towns in the hot months of the year.”