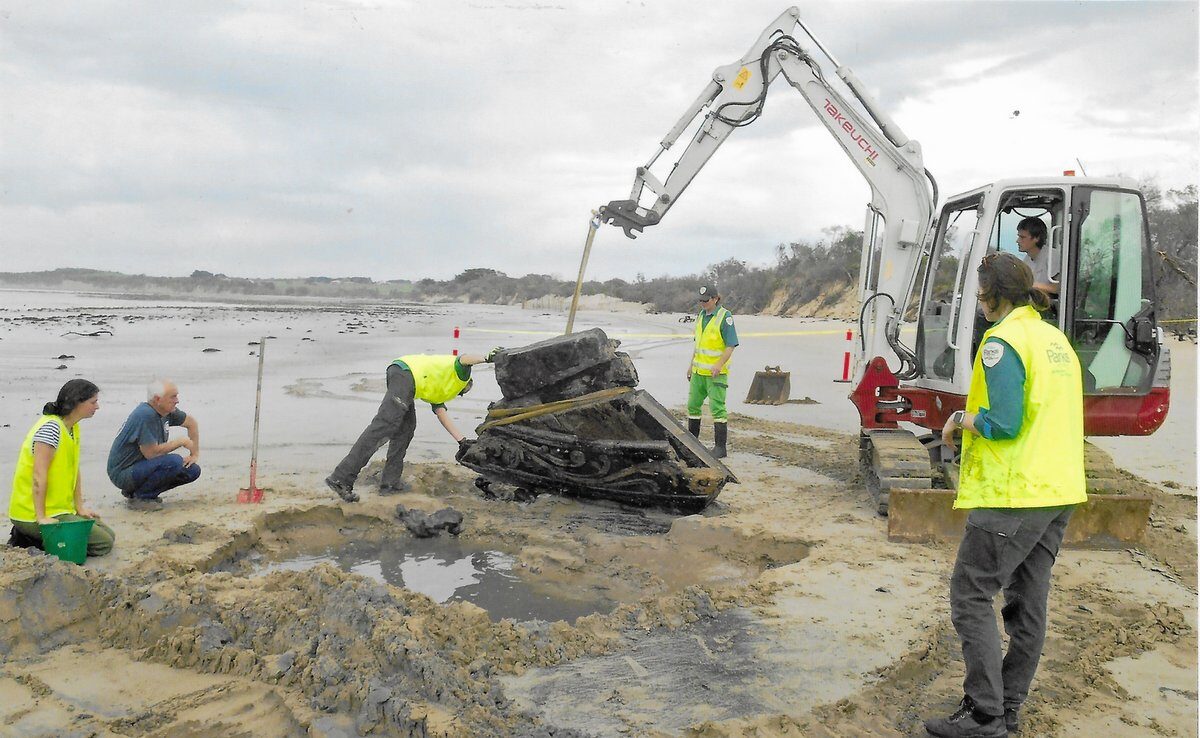 September has been a very busy month for many members of the Society in the running of our month long exhibition at the Community Centre in the Hub area. It coincided with another Inverloch event, drawing huge public and media Interest within Victoria which doubly alerted Inverloch residents and holiday makers to historical matters concerning the wreck of the timber ship – AMAZON. However, more will be said about that later.

It was most pleasing to see how strongly many members supported the Exhibition by volunteering to attend our information table. Many, yet again, said it was a positive experience to have a social chat with members. A special thank you to Pam Colvin for organizing the Exhibition duty roster and to Lloyd Bennetts for his regular attendance and looking after the sale of our ceramic. coasters (still available at $25 per set of 4 – there are 2 different sets). The coasters are now available for sale at the Post Office, the Newsagents and the Information Centre. I thank them for their support.

Our special section on ‘Identities and Pioneers’ display cards was especially welcomed, where we brought to life many of the names that are familiar, but of which little was known to many – names such as- Ullathorn, Norman, Ramsey, Howson, Loch and the like. There is much to be done in this particular area, especially in finding photos of individuals.

Our display of the “Rocket Man” & Rocket Equipment, including the rope box and the rocket itself was a great hit. Everybody loved it, and it was really great to display a replica of what was originally Stored in the Rocket Shed down on the Esplanade. In the next month the display will be re-erected in the Rocket Shed for all to see.

I must give a great compliment and thank you to Ray Burtt for his work on this particular display. It has been a tremendous thrill to collaborate and ‘work with Ray and the Inverloch Men’s Shed. The Society acknowledges the skills Ray has brought to the Society. Ray was also very much involved with the production of the canvas prints, five of which have been sold to raise funds for the Society. These highly individual and superb, large canvas prints are available for $180 each.

While we are very pleased with the public response to our third Annual Exhibition, the Committee has decided it will not hold an Exhibition in 2020, but will concentrate on finding suitable storage for our collection. This major and most frustrating problem must be solved, and we are hoping the Bass Coast Shire Council will be able to help us in this important matter. Our problem is well known, and was commented on by many visitors to the Exhibition who were somewhat stunned by our failure to find a solution. This is despite the great efforts of many people and the Committee over the many years of our existence, who have made repeated requests to the Shire, investigated many avenues of apparent opportunity, and have spent time talking to the appropriate authorities – including D.W.E.L.P., our elected Shire Councillors, and the Shire officers themselves. Vacant spaces, suitable for storing historical photos, documents, maps and artifacts in Inverloch are at the moment just not available. Professional storage in Inverloch is costly. Putting it simply – there is a lot to do! I have placed much emphasis in this Newsletter on photographs, which will help you understand and recognize the importance of local history in our society in general.

The wreck of the wooden ship AMAZON, which was deliberately beached to save all hands on deck at a beach at Inverloch way back in 1863, has increasingly in recent years become a popular tourist attraction. Professional archaeologists from Flinders University, Heritage Victoria, Parks Victoria, D.W.E.L.P. and the Bass Coast Shire have spent time examining the wreck, and because of recent storms, greater parts of the Amazon have been exposed. Already many pieces of the Amazon have been removed by people walking along the beach.

On Friday September 20th. the afore mentioned authorities arrived at the site, complete with a digger, and many interested locals. There were about 40+ people in attendance, including myself, having been contacted by Channel 9 Television. Many photos were taken by professional archaeologists, to permit the construction of a 3D image on computer. The two photos you see were taken by myself.

The removal of what turned out to be part of the bow, was very sensitively undertaken. We were told the piece was being taken to Parks Victoria’s Wonthaggi headquarters, to sit in a bath of water. All the wooden pieces evident on the beach will be buried ‘in a very deep hole’ near a sand dune, for its preservation. Concern was expressed that Inverloch might lose the Amazon, and that it should somehow remain in Inverloch.

The story of how to preserve such a historic wreck is also of concern, for full and proper preservation is extremely costly. If in any doubt about correct preservation, one should note the authorities who care for the historic wreck of the Dutch ship “BATAVIA”, now lovingly, and correctly preserved at the highly impressive Fremantle National Museum.

What’s on at our next meeting?

Two old 8mm films will be shown – one about Pine Lodge, the other about Primary School Sports at Inverloch back in the early 1950’s. Visitors most welcome.