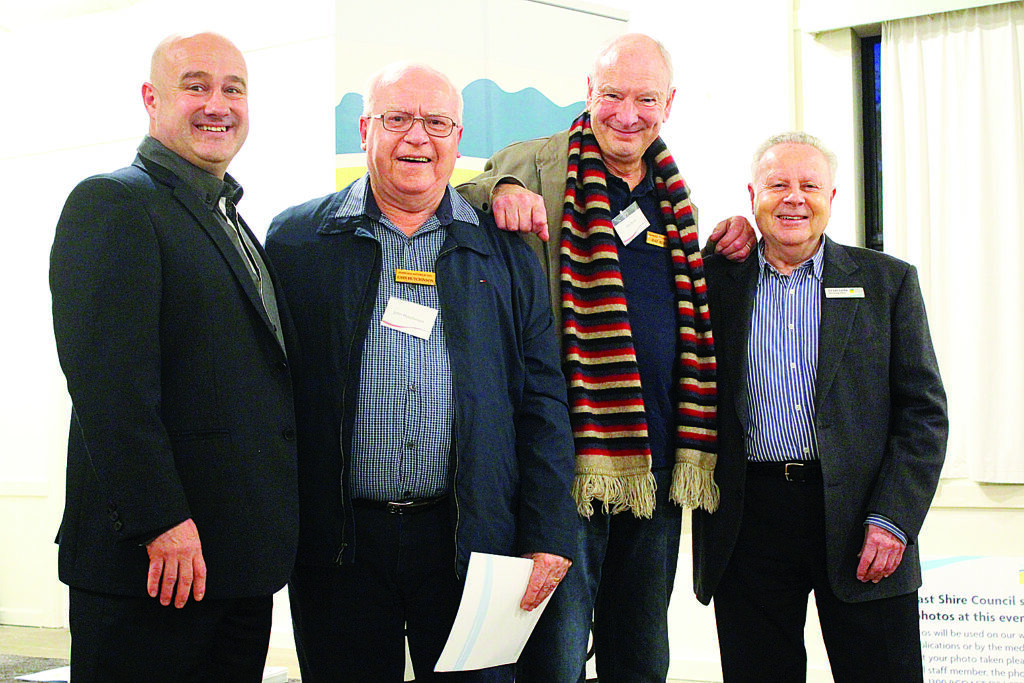 On June 27th. I, along with Committeeman Ray Burtt, attended a presentation at the Archies Creek Hall, for the presentation of the Community Grants 2019 Round 1. We were awarded two grants – one for the Model of the Rocket Launcher, and the other for funding of the September Exhibition.

The meeting, to which we were invited, gave us the opportunity to speak to the Mayor, Cr. Brett Tessari, and Councillors Les Larke and Cr. Pamela Rothfield. Bunurong Councillor Julian Brown was not there. We had lengthy discussions with Crs. Tessari and Larke and both acknowledged the difficulties we face in Inverloch in finding a site / home / building for the storage of our valued artefacts. They realise the uniqueness of our situation, with no obvious sites or buildings on offer, with all our older buildings gone, and sites priced way out of our availability. Crown land still seems our only available solution, unless some Council site somewhere opens up an opportunity.

In the meantime we continue to maintain our efforts to find a solution, which at times, seems further away than the last effort!

Recently we wrote to the Inverloch Recreation Committee, who, through the local press, invited ideas for usage of the reserve. We were told immediately that no new buildings would be permitted on the reserve, but eventually offered a space inside the green, sheet metal covered building opposite the school. The whole Committee inspected the site which measured 3.6 mtrs. square, to which we had to build two walls and provide a light for the space. The Committee decided not take up the offer, for the space is far too small, and
the physical situation is most unsuitable for the storage of our very valuable artefacts.

We thank the Recreation Reserve Committee for their offer, but sadly it will not fulfil our serious obligations in preservation and storage.

The September Exhibition will be with us soon. We are busy working en two three dimensional displays, along with — the creation of our successful display cards. It is exciting to see through checking our ‘archives’, what Inverloch people have achieved over the many years – some by individual efforts, others by combined community effort, and others. when working in harmony with the local Shire, the State and Federal levels of government. Just think of the Clocktower Committee, the Lions and Rotary Clubs, and looking back, how about the Ullathome’s, William Youll, James Nation, Clive Newton, Cal Wyeth, Hazel Swift, Jane Wyeth – then what about current times – the Fire Brigade, the SES, our very own Patron Eulalie Brewster, and not forgetting the many who silently and quietly serve this town in many roles as that overworked group, happily &conveniently called Volunteers. Let us with thanks, sincerely note them for their services. They don’t get awards, but without them many things in Inverloch would simply cease.

Our lack of display boards is still causing us some problems, so if you can help or know somebody who can. please give myself or the Secretary a ring.

The Inverloch Historical Society Inc. placed a wreath at the Cenotaph on Anzac Day. The commemoration was extremely well supported and the proceedings enhanced by the contribution of local dignitaries, school students and scouts from Inverloch.

Alison’s topic was about the wreck of the vessel Batavia which was wrecked off the coast of Western Australia in 1629. Alison visited the area recently whilst on a holiday cruise.

She commenced her talk and slide show with details about the group of islands where the vessel was wrecked. The islands are known as the Abrolhos Islands and are 80 km. off the coast from Geraldton. They were discovered in 1619 by Frederick de Houtman, and consist of a chain of 122 islands. Dirk Hartog had made the first authenticated sighting of Western Australia, and in 1606, the first authenticated voyage to Australia was made by the Duyfken. The groups of islands were named Pelsaert, Easter and Wailabi. The smaller islands had names such as Suomi, Hummock, Coral, Middle and so on.

Alison talked about the early history of the Dutch East India Company which was formed in 1602. It was considered to be the first modern type of company as it had Directors and Shareholders. It controlled trade between Europe and the East Indies for 200 years. It was a ruthless organisation, with its trade mostly concerning spices.

As mentioned earlier, some of the islands were the scene of the shipwreck and a tragic mutiny. The Dutch ship Batavia under the command of Francisco Pelsaert, while on her maiden voyage, hit a reef and broke up. 40 people drowned, the rest made it to shore.

The shipwrecked people could find little fresh water and very little food. Commander Pelsaert and some women went for help in an open boat eventually arriving at the town of Batavia (“ow Jakarta). While the Commander was away. a group of mutineers who stayed on some of the smaller islands decided to terrorise and massacre many others including women and children. When Palsaert returned, a number of the murders were executed.

For 300 years the wreck site was lost. However, in 1963, the wreck was discovered and identified, together with artefacts and other memorabilia. These items are held in the Western Australian Maritime Museum.