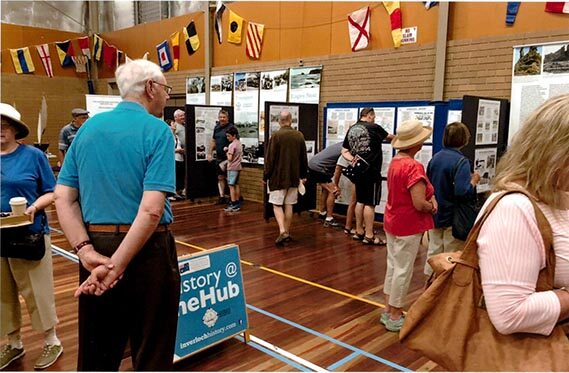 Since the November 2018 General Meeting, the Society’s committee has been busy organising exhibitions and submissions and attending meetings.

During January two exhibitions were mounted. The first was a half-day display at Inverloch Angling Club in concert with their annual fundraising market; and the second was a 3-day exhibition in the Stadium at the Hub over the Australia Day weekend, to coincide with South Gippsland Yacht Club’s Classic Wooden Dinghy Regatta. We are grateful to these organisations for providing us with opportunities to share some of the Society’s collection with residents and visitors. Our displays are always well attended and much appreciated.

Through the Australia Day event, in particular, many visitors to Inverloch became more aware of the town’s diverse features and heritage. The real estate display boards generated particular interest(see bottom right) , as did the newer displays about people and the beach. We thank all members who volunteered to attend one or both of these events – to answer lots of questions and to help inform visitors and residents about the historical background to the displays.

Our new projector, purchased with grant money supplied by the Public Records Office Victoria, was used at the 3-day event to continuously display 40 photographs in rotation, the projector was a brilliant addition. I expect this new acquisition will be in use at the February General Meeting.

The newer display material, added to our existing stock of around 100 display cards, will make mounting future exhibitions so much easier. A sub-committee has already been convened to start planning the Society’s 2019 Annual Exhibition which will be held in September. The specific aims have been drafted, and more detailed plans and a budget will soon be laid before the committee. Early planning is essential for a successful event.

A New Constitution for the Society

During January the committee met to review and discuss a draft new constitution for the Society, developed by Secretary Lynn Kirk. Thanks to good preparation by all committee members, the process was very efficient and produced good outcomes. In February, the committee will review the revised draft and all going well; the final draft will be distributed to members for debate and voting at the March 2019 General Meeting. The final stage will be submission to Consumer Affairs Victoria for approval.

This update is necessary as the Society’s original constitution (2007) no longer fully complies with the Victorian Government’s regulatory scheme for incorporated associations, and of course, much has changed over the past 12 years.

Read more about the Draft Rules by clicking this link…﻿

In December, a grant application was submitted to the Public Records Office Victoria for money to enable the Society to replace some of its old and inflexible exhibition equipment. The display panels we hope to acquire are light, portable and covered with a material that will accept Velcro attachments as well as pins. They will make it much easier for our volunteers to move the panels to set up displays, move the panels during the exhibitions (when necessary), and ultimately to pack them away at the end of the exhibition. They will also be more attractive. PROV’s timeline for notification of application outcomes is July 2019.

During January the Society’s Executive made a submission to the Inverloch Recreation Reserve Committee of Management in response to the release of their draft 10-Year Master Plan for the reserve, which members will be aware is in central Inverloch between Reilly Street and Sandy Mount Avenue.

Also during January members of the Executive attended a workshop convened by Bass Coast Shire to obtain input to the Shire’s proposed Arts and Culture Strategy 2019-29.

Both of these processes have potential implications for the future of the Society.

Keen observers will have noticed the installation of new signage and information panels around the replica Ripple on The Esplanade. The signage was installed and funded by Bass Coast Shire.

During 2018 Society members were closely involved in locating and selecting suitable photographs for these displays, and for researching and writing accompanying information.

Although the Society submitted designs for the panels, we were disappointed when this aspect of the project was contracted to others by Bass Coast Shire. We believe that our own design concepts and executions were more fit-for-purpose and would have produced a superior display, however, we acknowledge Bass Coast Shire’s latest contribution to the promotion of Inverloch’s heritage.

View & read all of the panels…

Adding to ‘The Collection’

Finally, could I appeal to all members, friends and others who have Inverloch heritage related materials packed away in drawers, cupboards, sheds, garages etc. to share those materials with the Society for current and future generations to enjoy and learn from. Family photographs can be a valuable source for the historical record, as can those from hobby and interest groups of all types.

Those famous, or should that be infamous, coloured slides from the 1950s, 60s and 70s are of considerable interest to the Society and very welcome. They are usually of outstanding quality, and the level of interest they generate is often surprising. Old maps, newspapers, posters, advertisements are also of interest to us.

Please let us have a look at what you have, and once recorded in our digital archive, they will be returned to you.

Our archivists Susan and Graham take great care of loaned material, and we do not need or want to retain your valued photographs, documents or artefacts.

Dr Maddy McAllister has completed her report on this heritage project and provided a copy of the report to the Society ahead of publication.

Follow this link for the full 70 page PDF report.

A brief extract from the report is provided below.

This project aimed to survey part of the beach at Inverloch to determine the extent of the shipwreck. The primary focus was on the underwater site and determining the level of degradation, then working on the structure located further up the beach.

The wreck lies approximately 150m west of Wreck Creek. Coastal erosion in this area recently increased and the wreck is at risk of further degradation due to its location.

Inverloch’s coastal environment is dynamic. Cold fronts from the Southern Ocean are channeled through Bass Strait and create intense winter swell and wave action along the shore. Although the foreshore accumulates sand during the summer months, from 2012 Inverloch’s Surf Beach faced continuous erosion with up to 10m loss per year.

Due to the location of the site—in the dynamic tidal zone—reburial would be an expensive project and may not work. Consequently, the recording project aimed to recover as much information as possible before the site degrades further. Despite best efforts, recording of the main site was not completed due to a higher than expected low tide level and poor weather.

Although the main site could not be accessed due to tide levels and swell, a new GPS location was recorded and aerial drone footage of the main site provides a baseline level of  recording for management purposes. In addition, the excavation of Site A (potential bow) and Site B (potential deck structure) were successful and provided valuable data for future work. Timber and copper alloy samples are already enabling archaeologists to piece together the story of the shipwreck after the crew were rescued and will hopefully provide insight into the construction of international cargo vessels in the mid-19th century.

A total of 27 artefacts were submitted by the public during the project, each was recorded, photographed and catalogued. Of the total artefacts, 37% were received from the Inverloch Historical Society while 63% were  contributed by individuals.

Many local individuals were actively interested in the preservation of shipwreck remains and aided in the recovery of significant archaeological items. The level of community interest and awareness is one of the greatest aspects of the Amazon shipwreck site. Locals of Inverloch and Wonthaggi appear to be taking on the role of site custodians.