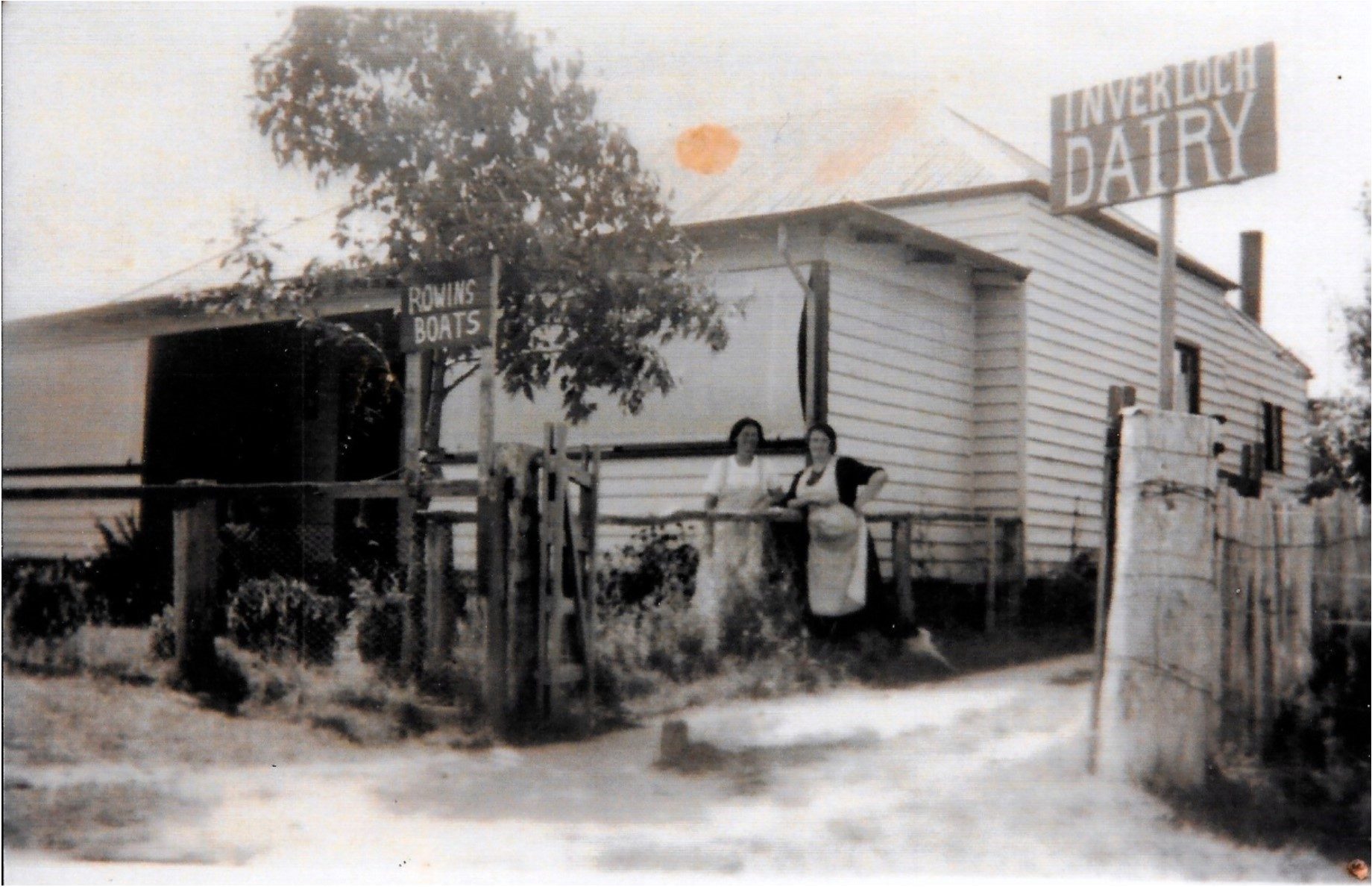 As we prepare for our August 2018 Exhibition, an examination of some of the photographs in the Society’s collection has produced some exciting finds; the photos reproduced in my column in this month’s newsletter are just three of the gems identified. They depict Inverloch many years ago, and are a reminder of the quote “If you want to see how far we’ve come, just look at the past”.

Your Society has an extensive and valued collection of photographs, prints, maps and documents, which reside at various members’ homes, ready for a thorough analysis once we achieve our own home, which we aim to be the Inverloch Maritime and Historical Museum.

Recently my attention was drawn to some articles and documents from the foundation days of the Society in 1996. They are a fascinating read, and I am absolutely certain that the good people featured in the photo and news clipping reproduced below would never believe that 22 years later the Society still has no ‘home’. One face in the group is still with us, Joan Lehmann. Joan is a strong and active supporter of the Society, and in my role as current President, I personally know of her commitment and considerable interest in local history.

The first meeting of the Society was convened on 26 June 1996 at the RSL Hall by Nancye Durham and Norm Deakin with 24 people in attendance. Members elected Nancye as President, Norm as Secretary, Jim Ward as Treasurer and Ken Howsam as Registrar.

In her remarks to the meeting, Nancye said, “Initially, donated historical items will be cared for by Society members until a permanent headquarters can be found. To that end, I have approached Bass Coast Shire about finding a suitable home for the Society”. Need I say more! We continue with the same issue pressing on our collective minds.

The steering wheel that was for many years mounted on the sign behind the Ripple on The Esplanade has been replicated by the Society, thanks to the work of the Inverloch Mens Shed, and restored to its original position by member Leon Lubransky. Thank you Leo. Aqua coloured polo shirts complete with the Society’s logo (embroidered in navy), can be ordered at $26 each, provided we receive sufficient orders. It would be a good look to the general public to see members at the August Exhibition wearing these shirts. An initial order of 20 shirts has been placed. However, most of these are spoken for. A shirt will be displayed at a general meeting when available. In the meantime, if you would like to place an order, please ring John Hutchinson on 5674 6159 and cite the chest measurement required in centimetres.

Members may be aware that Mering Corporation, led by Mr Jason Yeap, aims to develop land facing Anderson Inlet. Land purchased for the proposed development is located between Maher’s Landing and Pound Creek and will be used principally for residential development and boating facilities.

Several members attended Mering’s second community presentation at RACV Inverloch and were surprised to hear that an Inverloch Heritage Museum is on it’s list of possible projects at Maher’s Landing. In a subsequent discussion with Mr Yeap and his Project Manager, both expressed to me that Mering had liaised with Inverloch Historical Society regarding the proposal.

As President, I want to assure members that this is not the case. Any approach by Mering, or proposed response by the Society, would have been discussed at both a Committee Meeting and a General Meeting. Further, I am unaware of any approach to the Society by a representative of Mering for the purposes of liaison or consultation. This is clearly evident from meeting minutes.

As President, I stressed to Mr Yeap that the Society has at no time liaised with or been consulted by Mering. It is disturbing that Mering personnel have been misled in this way. It was cause for further concern to hear that Mering is responding to demonstrated community support for a museum. Ironically it is because of the Society’s efforts that community support for an Inverloch Maritime and History Museum has been demonstrated. To put it bluntly, of course we want a museum, but at Inverloch and not at Maher’s Landing or Pound Creek. A letter has been sent to Mering Corporation stating our concerns.

Excursion to State Coal Mine at Wonthaggi

Sixteen members braved the unpredictable weather on the day of our May 2018 excursion to have the pleasure of hearing first hand the recollections of Ron Motherwell’s working life as a miner at Wonthaggi. We started the day with morning tea in the comfortable Hall situated in the picnic area on the State Coal Coal Mine Museum. Margaret McCully, volunteer at the museum, having kindly and thoughtfully set up the arrangements before we arrived. After a short meeting, we moved on to an enjoyable lunch at the Mine Café. After lunch, we viewed an excellent documentary film which was followed by Ron’s account of work and play at Wonthaggi dating back almost 60 years. We thanked Margaret for her flexibility and adaptability as the weather discouraged us from the planned walking tour of the site with Margaret as a guide to the above-ground ground buildings. Margaret’s planning for our day was much appreciated,

The Society was able to donate almost $40 to the work of the volunteers.

John gave an interesting and highly detailed two part talk at our April 2018 meeting about his involvement as a volunteer at Korumburra’s Coal Creek and about the history of the South Gippsland railway system. A brief summary is provided here of the Coal Creek component of John’s talk. John’s very comprehensive talk about South Gippsland’s railways will feature in the July 2018 Newsletter.

The idea for the museum was conceived in 1967. Only seven years later, in 1974, the museum was officially opened by Premier Dick Hamer.
All of the buildings on the museum site were relocated from the local district; the first to arrive was the Court House. Others include: Woodleigh Railway Station, together with some rolling stock; Gilpin’s (drapery) Store; Devlin’s Store (now operating as a general store); Wrench’s Boot Shop (now trading at Wonthaggi); Bigg’s Skin Store, Boston’s Carriage Museum; Kilcunda Road School and several other school buildings; Krowera Church; and much more.
Coal Creek continues to operate as a museum, but like any other community organisations, it is finding it increasingly difficult to attract volunteers. Most of the long-term volunteers are now in their 70s and 80s and while some younger staff volunteer in association with the New Start Allowance, the museum has insufficient staff to open many of its buildings. Sadly, but this time for safety reasons, the old coal mine is no longer open due to its poor condition.
Notwithstanding these difficulties, Coal Creek operates a vibrant schools program along with very popular and successful Halloween Nights and Ghost Tours , all of which return funds to help with the museum’s upkeep and operations and help maintain public interest. Steam trains operate every one to two months outside the fire season and are a great attraction loved by many South Gippsland residents and visitors.
For anyone interested in taking a ride the train will be running on 4 more Sundays in 2018: 1 July, 5 August, 7 October, 2 December.

Raffle tickets will be sold during the August Exhibition. Contributions of treats for the Prize Hamper will be much appreciated and can be deposited at the June & July monthly meetings.

Neil Everitt will speak on the Hydro Scheme at Toora before WW I.

Neil’s book ‘The Power of Water‘ will be available to purchase at $25.