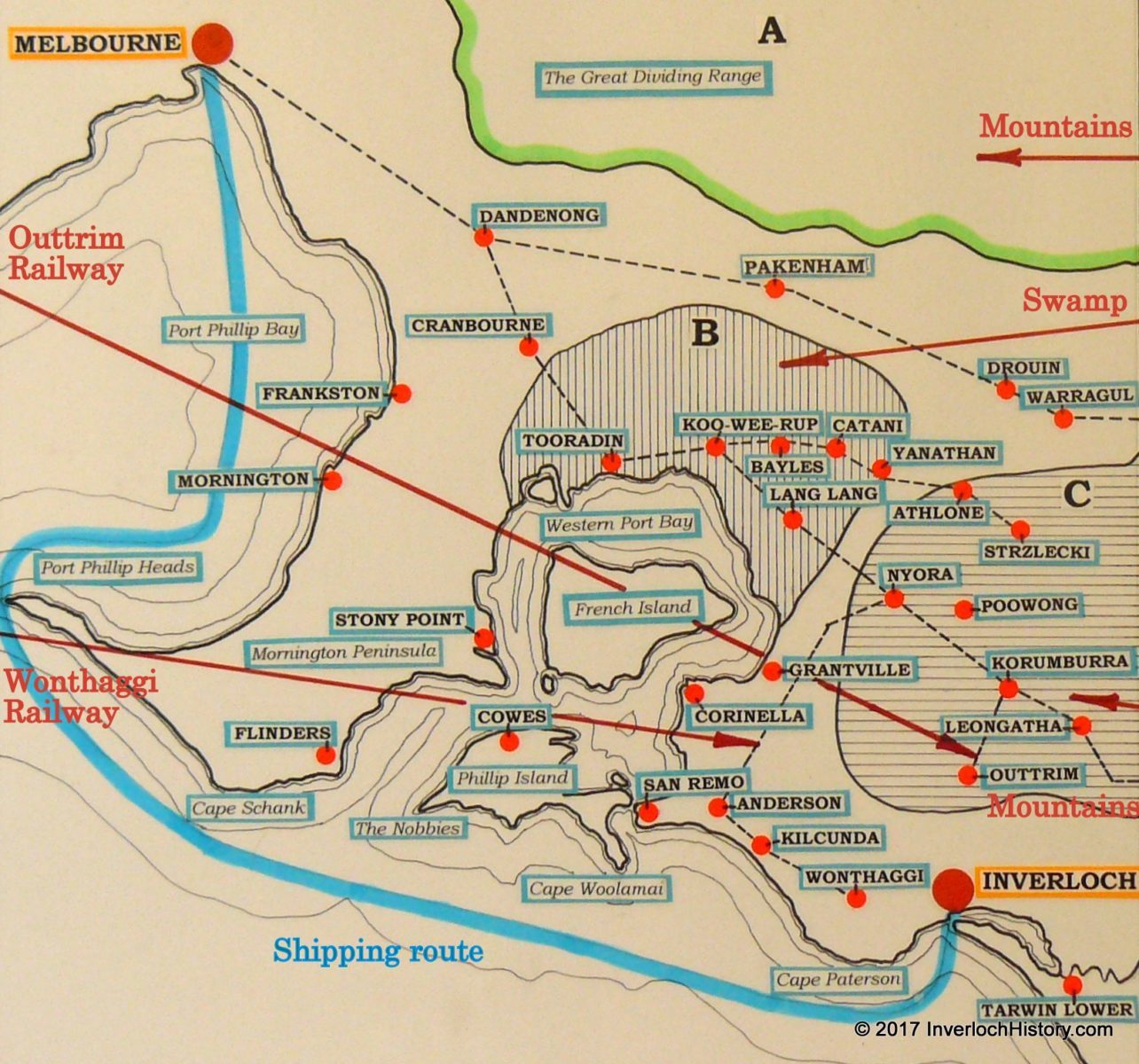 Today, as we easily move from place to place in South  Gippsland & onto Melbourne, its easy to forget that difficulties of travel & access to the rest of Victoria for our forefathers were major, at times almost impossible, simply because two somewhat overwhelming, natural features stood in the way – the great Koo-Wee-Rup swamp & the Strzlecki mountain range, with its magnificent timber & it’s high rainfall. Road & rail expansion could not occur. Consequently, South Gippsland was one of the last areas to be developed in Victoria with proper road & rail.

Obstacle A: The GREAT DIVIDING RANGE, stretching all the way into Queensland, is one of Australia’s great natural features… timber, water, minerals.

Obstacle B: The KOO-WEE-RUP SWAMP was a huge natural feature, which proved a massive barrier to the development of roads and railways. The solution in draining and using the rich land, was developed by the Italian civil engineer Carlo Catani in 1892 and finished in 1897. His large engineered drains, still evident to the motorist driving to Melbourne, are testimony to the success of his work.

Obstacle C: The STRZLECKI MOUNTAIN RANGE, although not as high or as formidable as the Great Dividing Range further north, proved another huge barrier to development in South Gippsland. It is said the huge timber resources of the Strzlecki’s, were far greater & better than other places. But the area was exceedingly wet, and any so called ‘roads’ or tracks were always in a shocking state for the movement of people or primary goods.

From Sea to Rail to Road

Communication to Melbourne from Inverloch relied upon the risky journey by boat, through Port Phillip Bay, the infamous ‘heads’, bass strait & the ever present difficulties of entering Anderson inlet. The building of the “Great southern railway” in 1892 from Dandenong to eventually Yarram, finally unlocked the key for the movement of people and goods in South Gippsland, especially primary goods. From that point on, the sea routes faded in importance. Sadly, rail has gone from South Gippsland, and as such an important part of our historical heritage – “The great southern railway” is no more!

The branchline from Korumburra to Outtrim, built in 1896, primarily carried black coal (including Jumbunna), but until 1910 also carried passengers and was the closest station to Inverloch, until the arrival of the railway to Wonthaggi. The journey between Inverloch & Outtrim was carried out by Owen Ullathorne with his horse and cart. He also carried groceries and mail.A local historian has described the completion of The Great Southern Railway” to Yarram as “marking the end of pioneering in South Gippsland”.

Built as late as 1910, the Nyora to Wonthaggi railway (another branchline off “The Great Southern Railway”), was built to mine black coal for the Victorian Railways when continued mine strikes in New South Wales forced the Victorian Government to seek supplies within Victoria. The State Coal Mine closed in 1968. Passenger trains ceased in 1978.

Previous: At the beach – How to play
Next: Kongwak & Pound Creek